As I made my first entrance in to the room in ‘character’ at the fourth Kent Independent Traders Awards I was struck by the party atmosphere that had spread out across the room. Having organised the table plan, I knew that people were there on their own and were thrown in to a group of other finalists, yet there was no sense of this as people were engaging with each other right from the start. 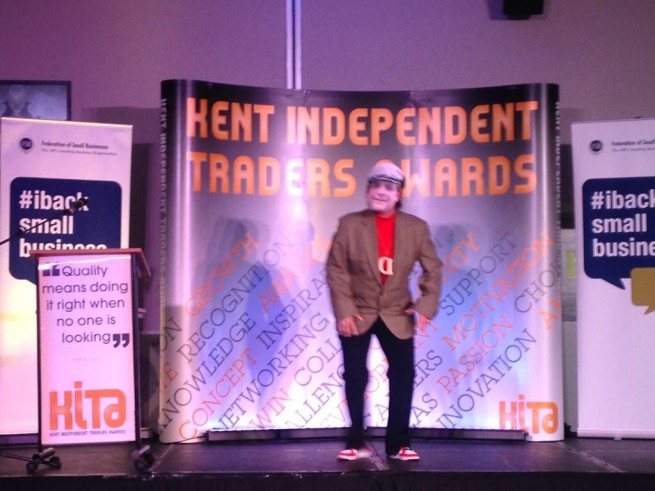 I admit, dressing up as Del Boy from Only Fools and Horses was something I was looking forward to, the look on people’s faces was a picture! The ‘Del Boy’ Mask didn’t arrive in time so I put together one that would be well deserving of  a Blue Peter badge in a very short space of time. Mincing off the stage after introducing one of the most genuine and resourceful entrepreneurs in Kent, Paul Andrews, I knew my smiling audience were in good hands.

Through the radio show he presents on Channel Radio, The Business Bunker – he actively promotes and encourages growth within the small/medium business community in Kent. His talk raised some interesting points about just HOW IMPORTANT and VALUABLE to the economic environment in Kent, businesses such as those sitting in the room that evening are!

By the time I made it back in the room dressed less like a dodgy trader and took to the stage again, there was an energy  that I would
love to be able to capture in a jar and give it away to small business owners who may feel that they are out of their depth, who are running around like headless chickens or who feel alone in their entrepreneurial world. I want to let them know that it doesn’t have to be like that, there are people who want them to succeed and who are prepared to help them get there! 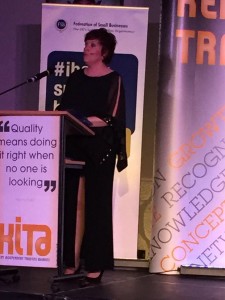 By the end of the evening I couldn’t stop smiling as I saw people connecting with each other, where I have a sneaking suspicion that they could well be about to embark on a fruitful and collaborative relationship. In the days following the event I couldn’t stop thinking about what I had experienced, I had the best seat in the house looking out over some of the most inspirational and talented business leaders and leaders of the future. I felt their passion, I felt their pain and I felt their joy at being recognised for all the hard work and sacrifices they have made to get to where they are today. There was no script when an emotional winner took to the podium to deliver their acceptance speech, there were only raw feelings accompanying the humble words of thanks. That in itself will stick with me for a long time to come!

I truly believe that we are embracing a massive shift in the economy and it is being driven by the power of the small business owners, and this is by no means limited to Kent. If we all work together and accept help when it’s offered, we are definitely a force to be reckoned with!